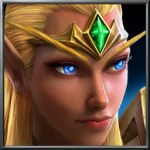 "That is what we call in the business, "having a swol brain". This is as opposed to have a "smol brain". It's really just an extension of the old maxim: "Instead of setting it to 'M' for 'Mini', just set it to 'W' for 'Wumbo.""

Hello! I'm Elf! Nice to meet you! I'm the creator of the WarCraft 3 campaign Chasing the Dawn, an officer in the Scarlet Classic guild Hand of the Unblinded, and just a general lore nut. To add to my list of quasi-necessary character references, I am also a creative writer, dungeon master (the non-kinky kind), historical trivia enthusiast, voice actor, game designer/modder, graphic designer/3D artist, burgeoning weeb, and obsessive creator of too many RP characters/lore. If you ever want someone to fangirl over obscure fantasy lore or send/receive manuscripts of unpublished novels/fanfiction, you have come to the right place.

As a roleplayer, I consider myself pretty open to whatever! However, if you're looking to make my day, I generally like dark, story-driven stuff, and I have a fascination with religion and gender when it comes to fantasy RP and an obsession with political intrigue and mystery, but I'm down for it all. I once ran a barber and ran hour-long haircut sessions for walk-ups. I'm currently working towards developing a true long-term character to grow with as part of the Moon-Guard community, but I love being part of projects and I am typically open to running NPC/quasi-PC characters for those who ask!

ONE EXCEPTION TO MY ALL RP RULE: please do not solicit me OOCly for ERP. I will write sexual themes as appropriate for my characters, but ERP is not really my cup of tea. Please and thank you.

I do WoW character and scene renders! In the past I'd mostly just used WMV and GIMP, but I'm currently in the process of learning Cinema 4D and have begun using it to make renders! I'd love to make renders of your characters; as I'm a beginner yet, I don't have a set price, so pay as you will (this does not mean don't pay)! Examples of my work are on MG-Wiki.

Thanks for taking the time to read all this! If you'd like to chat, message me on Discord! I'm Elf#2448. Always pleased to talk shop!

Retrieved from "https://the-first-regiment.fandom.com/wiki/User:TheElfLord?oldid=2502"
Community content is available under CC-BY-SA unless otherwise noted.