A Drill Command is an oral order. Most drill commands have two parts, the preparatory command and the command of execution.

Preparatory Command The preparatory command explains what or the movement will be. Military Training Instructors often call this the thinking command. It allows the individual performing the drill movement to form a mental picture in their mind of the movement that is about to take place. In "Forward, MARCH," the command of preparation is Forward.

All drill commands will be listed here. Remember that the members of any formation must respond in unison to the commands given. All commands are to be carried out as swiftly and efficiently as possible.

Attention is the position from which all other drill commands are issued. It is a way of standing in place that grants full awareness of one’s surroundings and issued commands. Soldiers are expected to stand at attention during drills. To call soldiers to attention, draw out the word’s emphasis – "ATTEN" is considered the preparatory command, and "TION!" is the execution command.

Unit Attention
A group of soldiers can be called to sudden and sporadic attention when an officer approaches or during drills as a test of awareness. A call for a unit to come to attention depends on the present unit’s size and composition. For example, if a small group of soldiers is present, the command would be “Group, ATTENTION!” If one was addressing an entire regiment, they would shout “Regiment, ATTENTION!”

When an officer holding the rank of Lieutenant or higher enters a room or the immediate area of a group of soldiers, the first soldier of lower rank to notice that officer should call for unit attention. Upon a call for unit attention, those soldiers not accompanying the officer, and ranking below the calling soldier, must stop what they are doing and come to attention where they stand. They must remain at attention until given orders by that officer, or until the senior ranking members leave the room or area. Should additional officers enter the room in the presence of the original arrival, additional calls to attention are not to be ordered.

A shorthand way to call for attention when noting an officer approaching is to simply shout “Group!” Salute the officer when calling the room to attention.

The position of Parade Rest is a position of presentation. It is often called for in uniform inspections and official parades.

When at Parade Rest:

The position of At Ease is a relaxed stance. This command may be given when soldiers are not in ranks but should still be silent, as in a classroom.

The position of Rest is the most relaxed stance a soldier can be in while in a formation. This command may be given when the unit leader otherwise occupied.

On the command of Present Arms, you are to unsheathe your weapon and hold it centered in front of you perpendicular to the ground. In an unarmed drill, this is taken as an order to salute and hold the salute. This is an order of honor, one often called for during ceremonies or formal inspections.

If armed with a sword or other one handed melee weapon, present it vertically, with the guard or hilt in front of the face. The other hand should rest at one's side as if at attention.

If armed with a crossbow or firearm, present the underside of the weapon towards the one receiving the honor.

If armed with a pole weapon or staff, present it vertically with both hands gripping it. One hand should be in front of the face.

If bearing a banner, lower the banner to a horizontal position with the lower portion of the staff resting in the pit of the right arm.

If unarmed, present and maintain a salute.

This command may only be given from the position of attention.

On the command of Order Arms, you are to sheath your weapon. If unarmed, return your hands to your sides. This command returns a soldier to the position of attention.

On the command of Draw Arms, unsheathe your weapon and prepare yourself for combat. Examine your surroundings for hostile entities.

On the command of Covers On, equip your headgear. If you are wearing a cloak, pull up your hood.

Soldiers should equip their headgear whenever outside, while on guard duty, or while in an unsecured combat environment unless ordered otherwise.

On the command of Covers Off, remove your headgear and tuck it under your right arm. If you are wearing a cloak, pull down your hood.

Soldiers should remove their headgear while indoors unless they are on guard duty or are ordered otherwise.

On the command of Carry On, a soldier should return to whatever task or duty they were doing if they were interrupted.

Dismissed is an order dictating an end to a drill or parade session, whereupon soldiers are free to carry out their next business or to rest if they’ve no standing orders.

A Formation is a group of soldiers positioned in specific order depending on the need of movement or combat strategy. The Stormwind Army employs a number of formations both in and out of combat.

A Platoon is made up of between 20 and 25 soldiers and a knighted officer. Platoon Order is a command for soldiers to form five columns, with five soldiers to a column. If there are more than twenty five soldiers present at the command, they should form multiple formations where each has roughly the same number of soldiers. 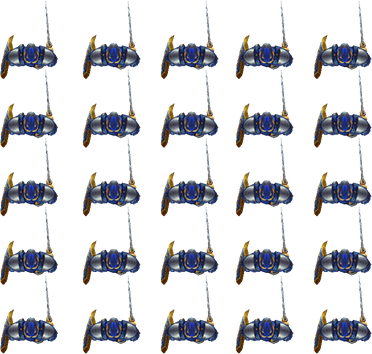 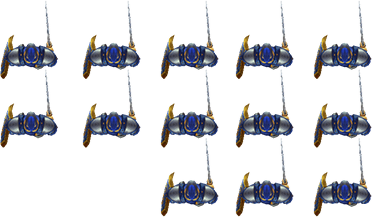 Any and all Formation Commands relating to the maintenance of formations will be listed below. Commands that manipulate the position or facing of soldiers should only be used when the formation is at Attention.

At the command “Fall In,” the soldier or group of soldiers commanded are to form a new Platoon Order formation at the position of attention. The soldier issuing the command may specify a different formation for soldiers to fall into. For example, one might give command to “Two marching columns, fall in!” Note that the preparatory part of a command should always come before the execution.

All soldiers of equal or lower rank to the commanding soldier are expected to follow the order and fall into the formation as soon as possible. The formation commander can pass leadership of the formation to another soldier, saluting afterwards.

“Fall Out,” is a command for the current formation to disband and disperse. After leaving the formation, soldiers should remain nearby and await further orders until dismissed or ordered to carry on.

“About Face” is an order for units to make a one-hundred-eighty degree turn to face the opposite direction, followed by automatic resumption of the stance of attention. The turn should be to the right.

“Right Face” or “Left Face” are orders to make a ninety degree turn in the indicated direction, followed by automatic resumption of the stance of attention.

While in organized formations, individuals must maintain uniform dress, cover, interval, and distance. The default spacing is equal lengths between the sides and the front, with enough space for a soldier to pass through. In a constricted environment, spacing may be less.

If there is a gap from a missing soldier in a formation and the “Dress and Cover” command is issued, soldiers should move to fill it. Soldiers should not move from their position otherwise. Wait for the appropriate command.

D.C.I.D.
The acronym "D.C.I.D." can be memorized to assist with orienting in formation:

Dress
Alignment with the soldiers to the side.

Cover
Alignment with the soldiers in front.

Interval
Space between the soldiers to the side.

Distance
Space between the soldiers in front.

“Open Order, March” is a command to double the spacing between ranks, with the front rank remaining stationary. The second rank should take three steps backward, the third rank taking six steps backward, etc. This is, for example, to allow an officer room between the ranks to administer inspections.

“Close Order, March” is a command to return to standard distance between ranks, with the front rank remaining stationary.

“Open Ranks, March” is a command to double the spacing between columns, with the rightmost column remaining stationary. The second rank steps to the left three paces, the third rank stepping six paces, etc. Face forwards during this maneuver and do not turn to move.

In the field of battle, “Open Ranks” does not dictate a drill procedure, but rather for soldiers to spread wider, for example, to allow things to pass through.

“Close Ranks, March” is a command to return to standard interval between ranks, with the front rank remaining stationary.

In the field of battle, “Close Ranks” does not dictate a drill procedure, but rather for soldiers to tighten together to not let anything pass.

Marching Columns are the primary means that the army employs when moving troops from one point to another over land. While the Stormwind Army typically marches in Double Columns, a call may be issued to march in a Single Column if soldiers are traversing terrain with known environmental hazards. Any present cavalry should ride alongside both sides of the formation where space permits; otherwise they should ride in front of and behind the columns.

Marching is the organized, uniform, steady and rhythmic practice of walking forward, whether it be alone or in formation. All associated Marching Commands will be listed below. Marching commands should only be called when the unit is at Attention.

“Forward, March” is the order to begin marching, covering on the soldier to the front. Soldiers in the front of the formation are to dress to the man to their immediate right.

A formation can be ordered to stop in place with a “Halt” command prefaced by the unit (Section, Platoon, Company, etc.) making up the formation. Upon hearing the command, the unit should take one more step with either foot before stopping and then coming to the stance of attention.

“Double Time, March” is an order issued to change speed of any given formation to a jog. Commanders should be wary not to exhaust their formation by maintaining double time for too long.

“Half-Step, March” is an order issued to change speed of any given formation to a half-step, which is slower than a walk. This order may be issued if the formation is escorting a slow-moving target or if the unit is marching through environmental hazards.

“Common Time, March” is an order issued to change speed of any given formation to a walk. This command should only be issued if the formation is currently at double time or half-step speed.

“Right Turn” or “Left Turn” are orders issued for a smaller, sharper turn in formation, with those on the inside edge reducing their movement to remain parallel with the rest of the formation.

“Right Wheel” or “Left Wheel” are orders issued for a larger, gradual turn. The same inner-outer step adjustments as the turn must be observed.

The following Combat Formations are called for when engaging enemy forces in battle. In most cases, they utilize positioning of armored vs. unarmored soldiers to seize the best tactical position.

Knot Formation is to be called when defending a stationary target of importance or when facing enemies from all sides. Armored soldiers should surround and face away from the center of the formation which should be comprised of support and ranged troops. Any present cavalry should maintain movement in a circle around the formation. 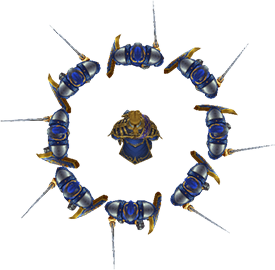 Escort Formation is called when soldiers are marching over long distances while escorting supplies or noncombatants. Soldiers should be positioned alongside, in front of, and behind unarmored support troops or noncombatants. Any present cavalry should ride alongside both sides of the formation. 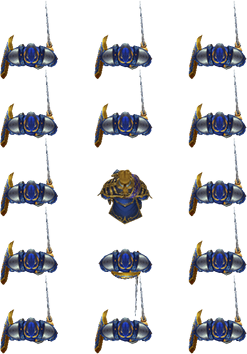 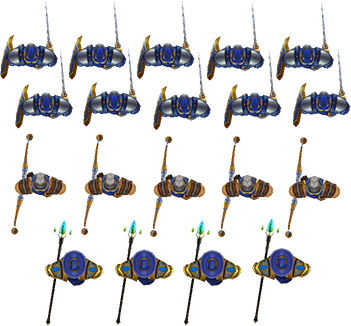