Robin Anorette Foy currently squires within the Order of Saint Isaac and has served her nation proudly since the Third Invasion of the Burning Legion. Born to a Paladin and a Priestess, she was dedicated to the Church of the Holy Light at a young age and has since shown enormous potential both theologically and academically under the tutorship of Sir Valrik the Exalted.

Though quite young, Robin has shown herself to be a fervent and devout cleric performing well beyond her years. When afield with her comrades she is a competent, tenacious warrior with a strong intuition and a stronger arm; and when away from it she is possessed of an inordinate aptitude for reading and writing, to such an extent that she has composed more than her share of essays and theological theses to bolster her understanding of the Light. Despite observations to the contrary she is actually quite an easy conversationalist and finds happiness in the company of others far more than her studious nature might suggest.

Robin is by all accounts a friendly-faced woman. Her fine brunette hair is worn in a lazy bun and dark brown eyes set beneath a pair of bushy eyebrows. She is of average height and lithesome, often preferring the billowy, temperate clothing characteristic of most Stormwindfolk.

Robin can most commonly be found clad in the standard-issue half-plate and lion-breasted surcoat of a Stormwind soldier. A single chevron is etched into either pauldron, marking her as a Private within His Majesty's Royal Army. Second only to her plate panoply is the wood-hafted steel warhammer she wears over one shoulder, secured by a strap and accompanied by a small hatchet at her waistbelt.

Robin Anorette Foy was born a daughter of Stormwind and the Light. Her father was Sir Eamon the Resolute, a lesser-known knight-paladin of Stormwind. Sir Eamon was squired during the First War, hastily knighted after the death of his mentor in battle. He comported himself with dignity and honor in battle throughout the Second War and was well-regarded by his superiors, though he was never known as being particularly exceptional. He was among a handful of Stormwindian knights chosen to train as squires under Sir Gavinrad the Dire during the Second War. Sir Eamon, however, made a name for himself only briefly. He was denied leave to join the Alliance Expedition to Outland, and was instead assigned to the homefront; he had faded into obscurity by war's end. He met Robin's mother, Emmaline Tyrsend, at Northshire in the waning days of the war, where she was serving as a chaplain and mender. Their courtship was long, and at times strained and distant. Both were known for their stoic commitment to their faith, and many close to them pondered if their relationship was actually built on love, or rather some sense of duty to each other, for reasons unbeknownst to those around them. Regardless, both were committed to the relationship, and were married on June 4, 14 LC at the Cathedral of Light, where both served at the time.

Robin was born on July 12, 18 LC, the first of two children. Her younger sister, Aimelle, was born the following year. Most of their early childhood was spent in the care of their godmother, Mother Belladena Strong, while Emmaline and Sir Eamon were sent throughout the kingdom to investigate reports of the Plague of Undeath. Mother Strong was Emmaline's mentor in the Church, now a venerable elder on the verge of retirement from the clergy. Mother Strong regularly exchanged letters with Emmaline, keeping her apprised of the sisters' progress. One such letter notably asked which of the three tenets of the Holy Light Emmaline expected her children to learn as their first words; Emmaline's answer, Tenacity, proved correct for Robin. Aimelle's first word is unknown; as the years went on, Robin increasingly became the focus of the letters, especially once she learned to write and could compose letters herself with Mother Strong's assistance, while Aimelle gradually faded from the discussion. Sir Eamon and Emmaline returned to Stormwind in late 23 LC. Robin was five years old. Two years later, Robin would be returned to the custody of Mother Strong as a novitiate.

Robin's Church education was strict and orthodox. Mother Strong was a traditionalist, firmly and vocally opposed to any deviant teachings, such as the Scarlet Light. Mother Strong retired not long after Robin's formal induction into the Church, but her influence in Robin's early life was felt for many years afterwards, reinforced by the mentors Strong had recommended to replace her when she left. Emmaline and Sir Eamon still came in and out of Stormwind regularly on missions for the Church, but Robin kept in touch by letter for much of her childhood. These interactions seemed to reinforce in Robin the same sort of dutiful relationship her parents maintained with each other, as well as the strict orthodox views adhered to by the family. Robin was generally known as a diligent and contemplative student, who considered her positions deeply and held her own in theological debates with novitiates and priests many years her senior. As she entered her teenage years, she was put on a Cathedral short list for evaluation as a candidate for paladin training.

Sir Eamon retired from service as a paladin in 31 LC. He had suffered a leg injury in the defense of Stormwind from the Scourge in 28 LC, which had borne a necrotic taint that could not be fully cleansed, preventing its full healing. A fall from his horse in 30 LC reopened the wound, causing permanent damage to his right leg and severe necrosis that had to be exorcised. He opted to retire rather than take up a purely ceremonial role within the Silver Hand; his letters suggest that he considered it inappropriate for one to hold the title of paladin if one could no longer fight for one's faith. Emmaline continued her service as a priestess at home and abroad. It is unclear Aimelle's role in the family by this point. She was not regularly included in family letters, and her writings are generally more sporadic and less articulate than Robin's.

On Robin's 14th birthday, a council of priests within the Cathedral, led by one Father Arthur Sedelbrand, petitioned the Silver Hand on her behalf, requesting that she be trained as a squire. This petition was accepted, and on November 12, 32 LC, she was granted an official transfer from the Cathedral of Light to Light's Hope in Lordaeron for training. She received training as part of a small group of aspirants there, under the tutelage of Sir Aralt the Oathkeeper, a survivor of Prince Arthas's purge of the Silver Hand during the Third War. Sir Aralt was known among his contemporaries as quiet but dogmatic. His epithet of Oathkeeper was chosen by himself - replacing his original epithet of Honourable - as part of his commitment to embodying the spirit of the original Silver Hand, and he refused to deviate from that spirit in any form. Any sign of doubt or deviancy was met with harsh discipline, usually in the form of enforced fasting and isolation for several days. Many of his trainees left without completing their training, but Robin persevered, and officially became Aralt's squire after two years at Light's Hope. This would mark the beginning of the second half of Robin's ascension.

During the Third Invasion of the Burning Legion, Sir Aralt and Robin served the Silver Hand alongside Argent Crusade forces in the Plaguelands, protecting Light's Hope and the surrounding regions. It is believed by some that Sir Aralt participated in the battle against Darion Mograine and the Ebon Blade in the tombs of Light's Hope, but there are no records to confirm or deny this allegation. Sir Aralt is known, however, to have expressed increasing discontent with Forsaken activity in Lordaeron's former heartland. When the Blood War began, Sir Aralt took command of several Argent Crusaders and Silver Hand squires who wished to break neutrality and laid siege to Caer Darrow, then held by a force of Deathstalkers. Sir Aralt's forces took command of the fortress, and held it throughout the early months of the Blood War. By this point, Robin had progressed significantly in her training, and in early 39 LC she was sent on an extended pilgrimage to follow the footsteps of Sir Turalyon to the Dark Portal. During her absence, a Scarlet warband of unknown origin assaulted Sir Aralt's position at Caer Darrow and killed the entire garrison, including Sir Aralt and his Quel'dorei wife Vyendoliah. Vyendoliah's body was recovered from the Darrowmere, badly marred by beastly wounds, along with a small number of crusaders; though the bodies of Sir Aralt and the rest of his garrison were never recovered. A funeral was never had for the fallen Sir Aralt.

While many in the Silver Hand were sympathetic to Sir Aralt's decisions during the Blood War, he had acted without the authority of the Silver Hand, and caused division between the Silver Hand and its allies in the Argent Crusade by taking command of Argent forces for a non-neutral operation. As such, Sir Aralt was posthumously censured by the Silver Hand, and the final year of Robin's squireship under him voided. Robin was given a short leave, and instructed to either petition the Silver Hand for a new knight to squire under, or to assimilate into another paladin order to do so if she did not wish to continue under Silver Hand leadership. As expected, she was moved into a Stormwindian Paladin sect.

Concurrent to her transition to the Order of Saint Isaac, Robin was enlisted with His Majesty's Royal Army late in 40 L.C. This would mark the beginning of her military service and serve as an introduction to domestic service. Her squireship is thus ongoing.

Robin's first Knight-Mentor away from the Silver Hand proper, Valrik has proven himself a terrifying-- if exceptionally effective-- mentor for the aspiring Squire. Though they have little in the way of a personal relationship, and rarely do they exchange words but for her education, he has overseen her progress in the last year of her squireship with a strict eye and a stricter demeanor.

While a fairly recent arrival in her life, Robin has grown closer with Anna than just about anyone else in the Regiment. A few years her elder, Anna wields a blistering silver tongue (much to Robin's amusement) and has proven herself an uncompromising firebrand in her ideals, making her the perfect foil to the soft-spoken, mild-mannered Squire in just about every way. 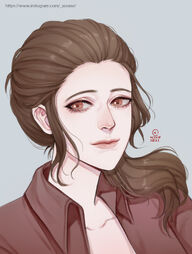 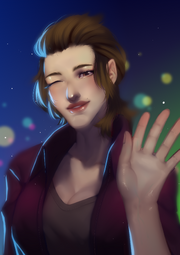 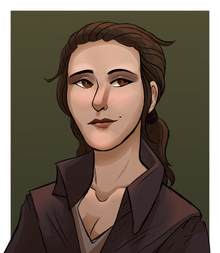 Retrieved from "https://the-first-regiment.fandom.com/wiki/Robin_Foy?oldid=4840"
Community content is available under CC-BY-SA unless otherwise noted.