The scouts and foresters of the Stormwind Reconnaissance Corps work tirelessly to provide their superiors with a broader view of tactical information, whether by mapping routes through difficult terrain, scouting out enemy positions, or performing covert operations against enemy targets. In the decades that have passed since their kingdom was decimated during the Orcish Wars, the Stormwind Army has determined that its failure to detect the full extent of their enemy cost them the war. The Stormwind Reconnaissance Corps ensures that mistake will never be made again.

Long before the founding of the Royal Army, or even the formation of the Kingdom of Stormwind, reconnaissance was a vital component of any battlefield commander's tool chest. The Arathorian Legion employed auxiliary troops as scouts ahead of their forces in the great troll war and during their conquest of the Eastern Kingdoms. When the Empire of Arathor colonized the lands which would become the Kingdom of Stormwind, they sent foresters to map the terrain and determine where settlements would be most accessible. These scouts would later settle in the woodlands of early Stormwind so that they might best relay the lay of the land to their imperial leaders.

The rebellion known as the War for Stormwind's Independenceled by King Logan Wrynn I roughly six centuries ago saw many soldiers of the Arathorian Legions defect to the cause of the Stormwind Militia. At the time, King Faldir of Arathor had grossly mismanaged the colony of Stormwind, abandoning several of the frontier settlements in favor of cracking down on dissenters in the colonial capital. Many of the auxiliary scouts joined the Stormwind Militia due to Arathor's failure to protect their homes. These scouts and foresters would be invaluable to the war effort against the Arathorian Legion, utilized to their fullest potential in guerrilla warfare. Those Stormwindian scouts who weathered the war for independence were rewarded with new titles and duties by the then-crowned King Logan Wrynn I. Several were granted titles of lordship at the fringes of the kingdom, where they would protect the frontier.

When King Samson Wrynn established the standing Royal Army of Stormwind, he was keen to introduce units dedicated to reconnaissance and scouting. These units would make up the beginnings of the Stormwind Reconnaissance Corps. With a new army backing the crown, the Kingdom of Stormwind conducted several expeditions to expand its territory. The scouts and foresters of the Royal Army would act as trailblazers and pathfinders, identifying terrain landmarks and tactical advantages that could be seized by the infantry. These brave reconnaissance troops would guide the Royal Army to victory in the Gurubashi Troll War and the Gnoll War, solidifying their place amongst the crown's service.

The Reconnaissance Corps would meet its match in the Orcish Horde during the First War. Under Warchief Blackhand, the orcs were able to pillage and sack settlement after settlement before Stormwind could mobilize its scouts and muster a counter-offensive. Some claim that the traitor Medivh knew the inner workings of the Kingdom and misled King Llane in regards to the orcs' true numbers and strength, preventing tactical reports from reaching the capital. Whatever the case may be, the Orcish Horde was able to conquer the Kingdom of Stormwind after routing the Royal Army in Stormwind City. Those scouts and foresters who escaped alongside Lord Anduin Lothar vowed to retake their kingdom and to never allow such a tactical rout to occur again.

During the Second War, the surviving scouts and foresters of Stormwind joined the rag-tag band of Royal Army survivors in the great fight against the Orcish Horde. Passing on their experience in fighting orcs to their comrades, these scouts would learn scouting tactics from the high elven ranger corps of Quel'thalas. Together with the might of the Alliance of Lordaeron, Stormwind was liberated and reconstituted under the rule of a young King Varian Wrynn. The Stormwind Army was reformed, and along with it, the Stormwind Reconnaissance Corps.

Now equipped with some of the best scouting equipment known to man, the Stormwind Reconnaissance Corps proudly serves alongside the Royal Infantry in all matters of pathfinding, resource location, and tactical intelligence gathering. While most reconnaissance troops are now trained in Elwynn Forest, scouts and foresters are sourced from throughout the Eastern Kingdoms to fill the roles needed by the Royal Army.

Within the First Regiment of the Stormwind Army, the 7th Royal Infantry Battalion fields a contingent of scouts, foresters, and rangers from the Stormwind Reconnaissance Corps. Comprised of four distinct infantry companies, the 7th Battalion provides the raw bulk of the Regiment’s forces and is one of the original founding military units of Stormwind.

The details of how the 7th Battalion is broken down into individual units can be found in Unit Composition.

The members of the Ranger Order of Westridge hold seniority over the 7th Battalion's Reconnaissance Corps in all matters pertaining to tactical scouting, pathfinding, and infiltration. Experienced members of the Reconnaissance Corps may apply to be trained and tested under this organization so that they may be granted the title and cloak of a Ranger.

Sir Brandon Hood is a Ranger-Knight that serves as the leader of the Reconnaissance Corps. Formerly the leader of a bandit group known as the Deadwind Marauders, Brandon fled the group when he discovered that Duke Maxen Montclair was his father.

As an illegitimate son, Brandon's existence put Maxen at odds with then-Duchess Mairaed of Westridge. Maxen quietly knighted Brandon and assigned him to serve in the First Regiment of the Stormwind Army under the command of Sir Grayloth Ke'tar as a Ranger Knight in the Ranger Order of Fairpeak. When Sir Grayloth transferred to The Fighting Fifth shortly before the Iron Horde Invasion of Azeroth, Sir Brandon took command of the newly formed Ranger Order of Westridge to protect Westridge's southern woodlands.

A resurgence of the Deadwind Marauders forced Sir Brandon to relinquish his position to Lady Caiterina Stonewall. He has since returned to lead the Reconnaissance Corps during the war against the Burning Legion.

The various Combat Roles that members of the Reconnaissance Corps may take on and their associated requirements shall be listed below. 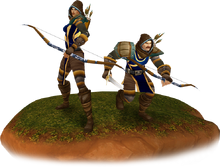 Scouts are light reconnaissance troops that take on skirmishing tactics on the battlefield. They quickly gather and relay tactical information to their superiors. Due to the relatively sparse protection their equipment provides, scouts avoid melee combat and engage enemies at range with recurve bows. Scouts are often sent with more senior reconnaissance troops as assistants. 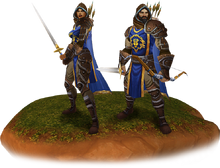 Foresters are dedicated reconnaissance troops that assist the infantry with pathfinding in rough or difficult terrain. They are often trained in the art of map making, for maps of local terrain provides crucial aid to tactical and logistical efforts. Should they be engaged in combat, foresters are trained to utilize their surroundings to outmaneuver their enemies. 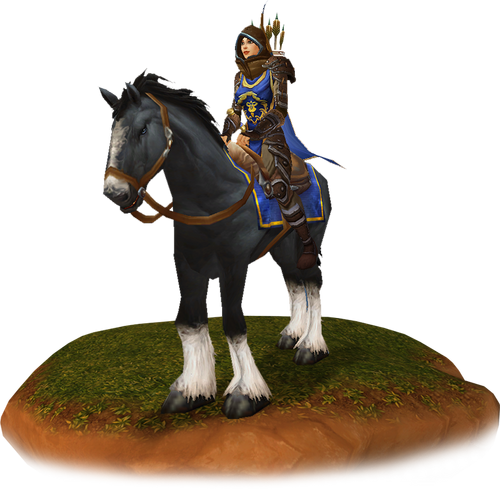 Outriders are long-range mounted reconnaissance troops that may be sent deep into enemy territory ahead of a planned attack or movement. Atop swift rouncey steeds, outriders may easily outrun enemy patrols should they be discovered. Outriders are known throughout the realm for their skill in horseback archery, which on the field of battle may be utilized to deadly efficacy.

Humans, dwarves, gnomes and high elves are automatically placed in the Reconnaissance Corps at the rank of Recruit if they have shown a particular affinity for scouting and subtlety. Recruits will be initiated in the role of Scout. They may advance to the role of Forester upon achieving the rank of Private.