During the reign of King Adamant Wrynn II, the Kingdom of Stormwind sent an expeditionary fleet to colonize Stranglethorn Vale. Landing on the southern cape, the fleet quickly constructed fortifications to defend themselves against the Forest Trolls of the Gurubashi Tribe. Father Riode Janiero was the missionary priest of the expedition.

On the first night of the landing, Father Janiero went out to gather water from the lagoon. After blessing the clear water, he looked out to the sea. Sources vary as to why or how he did, but at the shore of the lagoon, Father Janiero cried out and pointed towards the island at the lagoon's mouth. Some say it was a divine vision, or simply good eyesight, but Father Janiero had spotted dozens of canoes fast approaching the foothold against the backdrop of the sandy isle.

Seething with rage at the humans' encroaching on the Vale, the jungle trolls rowed into the lagoon in the black of night. However, due to Father Janiero's call, the armsmen of Stormwind were well prepared for their arrival - loading ballista and crossbows with projectiles lit with fire. When the canoes were in range, the burning projectiles were released. Burning arcs of flame impacted amongst the tightly-packed wooden canoes, cries of pain, and anguish echoing between the cliffs. A rain of iron-tipped arrows soon followed, finishing off many of the trolls who were not shattered by the siege bolts. Faced with annihilation, the trolls who remained retreated into the night.

When the sun rose, a grizzly sight met the eyes of the king's men. The surface of the lagoon's water had turned black from the trolls' blood, many of the trolls slumped over dead in their scorched canoes. Father Janiero, seeking the Light's blessings for the newly founded colony, held a solemn prayer for the trolls that perished for their blind hatred. The colony, as deemed fitting, was given the name of Blackwater Cove in honor of the battle that almost spelled the destruction of the colonists' progress.

Contending with parasites, disease, and monstrous beasts, the colonists of Blackwater Cove turned to their faith in order to weather the horrors of the jungle. Father Janiero assembled a retinue of zealous followers, each determined to see the Light's will done through the taming of the wilds. The colonial guard of Blackwater Cove set out on several expeditions into the jungle. Janiero and his faithful servants would often accompany these missions in order to survey the land and record their findings for the church.

On one fateful expedition, the Blackwater colonial guard ventured far to the north of the colony in hopes of finding the fabled golden treasure of the Gurubashi trolls. Father Janiero and his faithful joined in the expedition, hoping to catalog any troll ruins they encountered. After traversing Mistvale Valley, the expedition was suddenly surrounded by a raving pack of jungle trolls from the village of Jubuwal. Outnumbered and at the trolls' mercy, the expedition surrendered and was taken captive to the great Gurubashi Arena. Without means of contacting their allies, the colonial guardsmen had no choice but to fight any manner of savage beasts in the troll coliseum. One by one, the colonial guardsmen fell in combat - some of them eaten alive by tigers and gorillas.

Father Janiero called upon the Light to aid his brethren and grant them strength in battle. The Light answered to the faithful - empowering Father Janiero's retinue with righteous flame as they fought in hand-to-hand combat. With the Light's backing, the colonial guardsmen and Father Janiero defeated scores of beasts and trolls alike in the arena. Earning renown and becoming a crowd favorite of the trolls, Father Janiero became known as the "Warrior Monk" of men. Despite the Light's blessings, the colonial guardsmen and faithful captives fell as gladiators over several months until only a handful of them remained. Sympathetic to the valor displayed in the arena, several troll warriors petitioned that Father Janiero be put against a grand champion of the Gurubashi in order to earn his freedom. Unwilling to anger his warriors, the chieftain of Jubuwal agreed and organized a ceremonial match with his greatest champion.

Elevated to the chieftain's seat in the coliseum, Father Janiero was given a champion's greeting by the warriors of the Gurubashi Tribe. It was there that the chieftain presented Father Janiero with the opportunity to go free and return to Blackwater Cove with his victory. In a motion that shocked the troll warlord, Father Janiero refused, instead requesting that his remaining brethren, the faithful followers of the Light, be released in his stead. The chieftain of Jubuwal reluctantly agreed.

As his retinue was given safe passage out of the arena, Father Janiero asked that they all retain their faith in the Light and wield it for right and the good. Father Janiero remained in captivity in the Gurubashi Arena and is presumed to have died as a gladiator.

Word of Father Janiero's deeds swept throughout the Kingdom of Stormwind, inspiring many to take up the Light in monastic study. For his sacrifice, Father Janiero was canonized as a saint by the Church of the Light. The Order of Saint Janiero was founded in his name as a military monastic brotherhood. 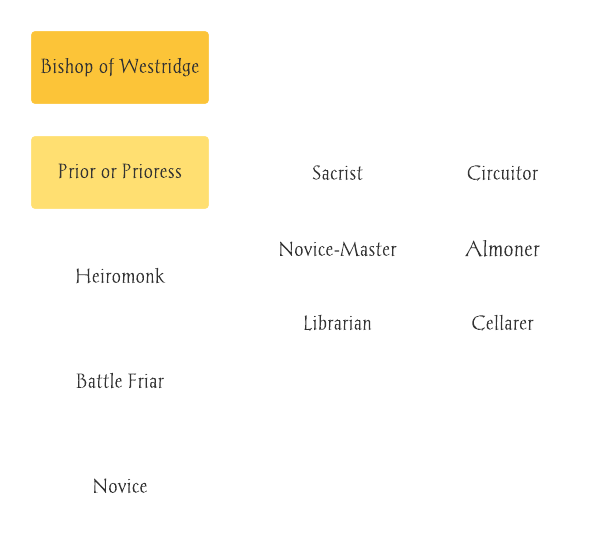 The patron saint of the Priory of Westridge is Saint Riode, a missionary priest who saved the fledgling colony of Booty Bay by defeating the Champion of Jubuwal in hand-to-hand combat and sacrificing his freedom so that others could live in his stead.

Retrieved from "https://the-first-regiment.fandom.com/wiki/Order_of_Saint_Riode?oldid=4346"
Community content is available under CC-BY-SA unless otherwise noted.